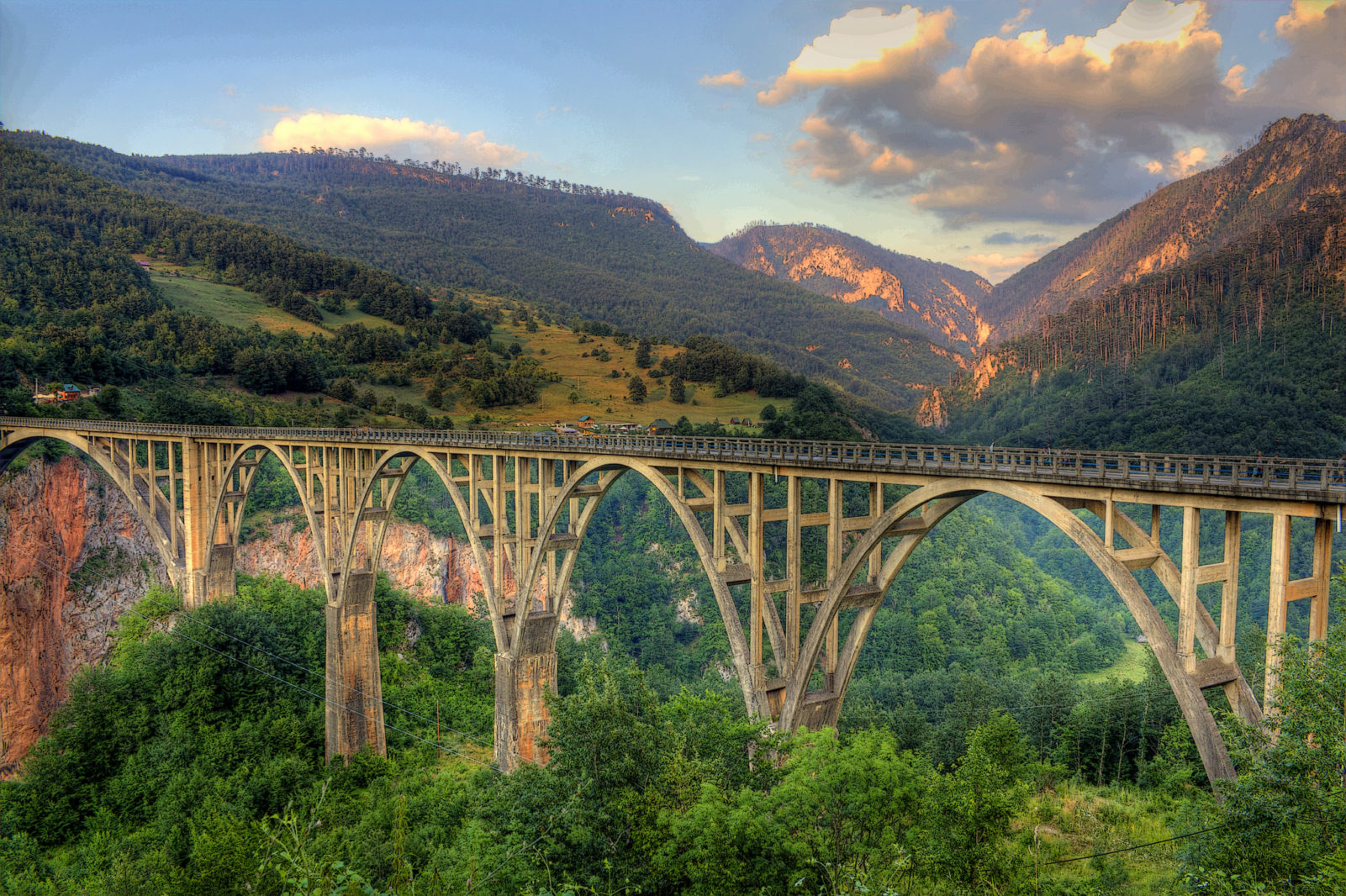 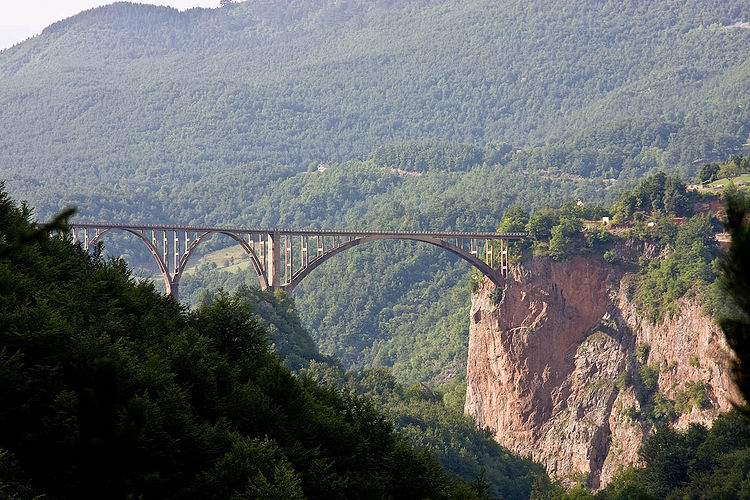 The Đurđevića Tara Bridge (pic. above) is a large concrete arch bridge that was erected across the Tara River in northern Montenegro. On completion in 1940 it was the largest road-bridge made from reinforced concrete in Europe. It is located at the crossroads between Mojkovac, Žabljak and Pljevlja, between the villages of Budečevica and Trešnjica. Partially destroyed during the Second World War, this bridge was fully repaired and placed back into operation during September 1946.

#2.Lady of the Rocks in Perast

This small island was man-made from rocks and sunken ship and was built in the 15th century. They used to fill the ships with rocks and then sink them and that has gradually increased the size of the island to what it is today. The main attraction on this islet is the Roman Catholic Church, Our Lady of the Rocks. (Italian: Chiesa della Madonna dello Scarpello).  You can view these ancient buildings and several historical relics in the attached museum. The interior of this church has also been painted with many paintings depicting scenes from the bible. 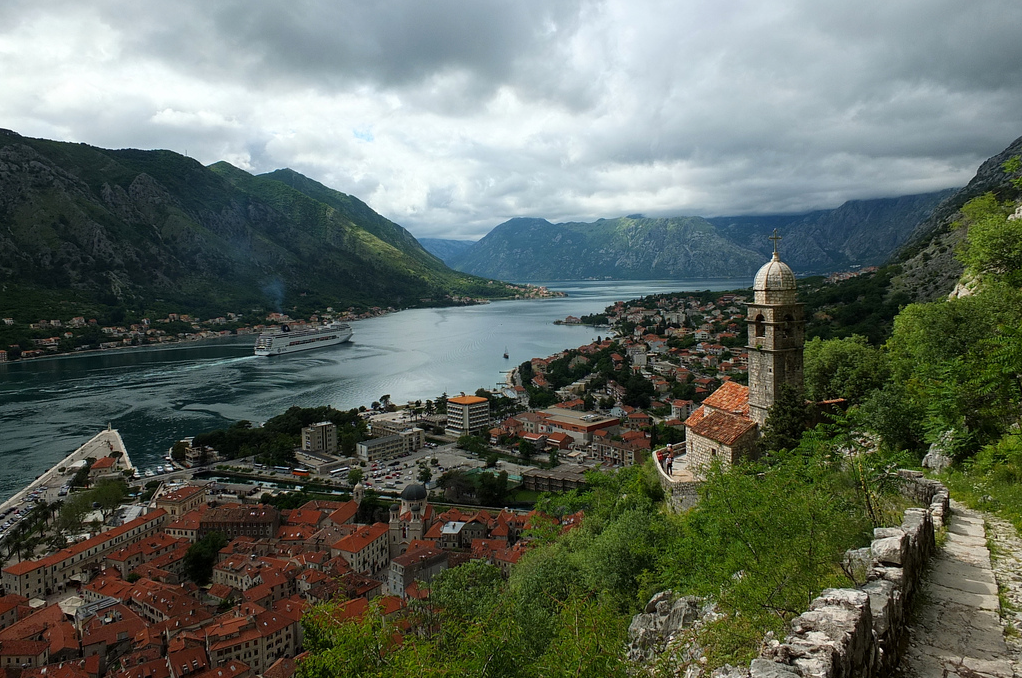 The medieval town of Kotor (Italian: Cattaro) was protected by a wall that was built around it. This fortification also contained a castle, smaller buildings, ramparts, towers, bastions, citadels and of course gates. This is an example of military architecture from Illyria, Byzantium, Venice, and Austria. This culturally significant site in Montenegro has been listed in the World Heritage Sites in 1979 labeled Natural and Culture-Historical Region of Kotor. Inside these amazing city walls you’ll find narrow winding roads, town squares, palaces and churches as well as the houses of the ordinary citizens made from cut stone. 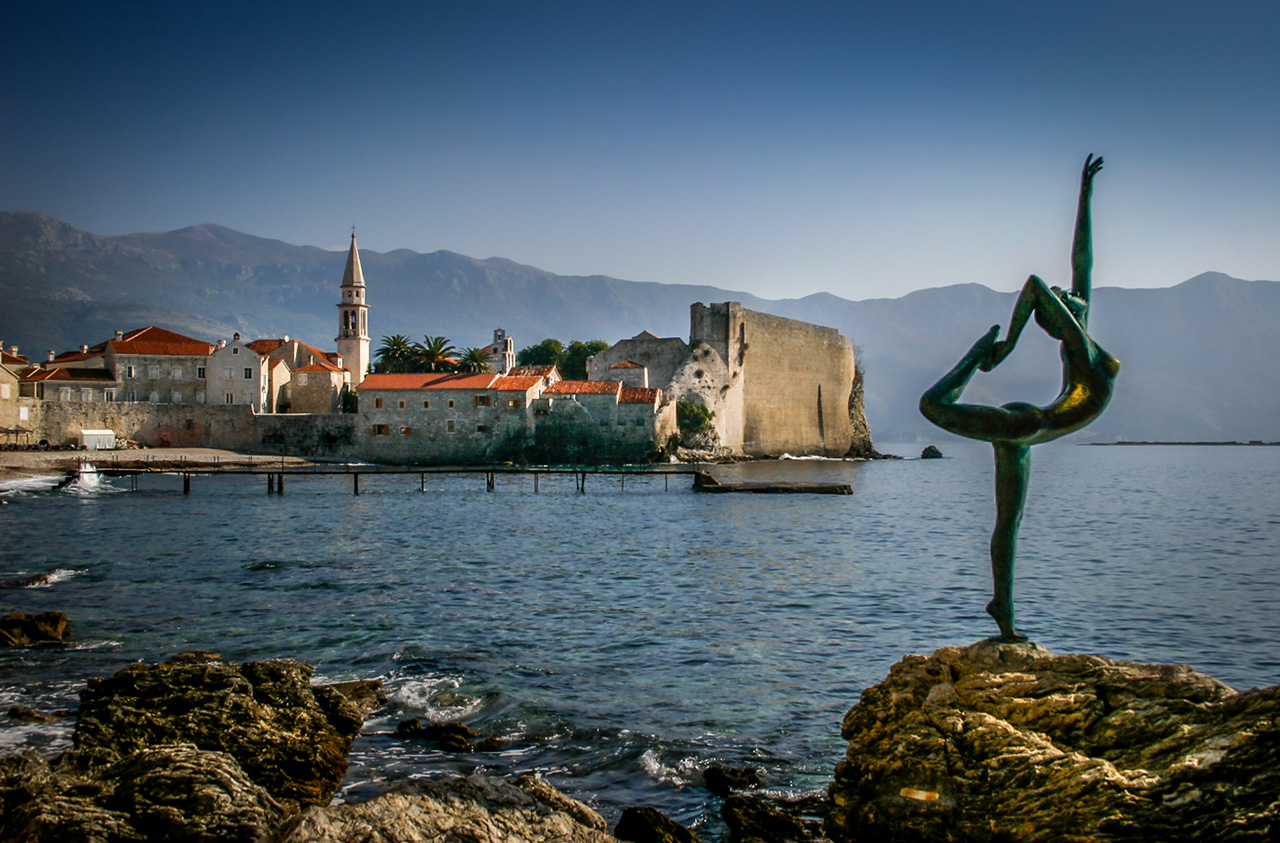 For two and half thousand years this was known as The City of Illyria. It is one of the oldest settlements on the Adriatic coast.  According to legend, Budva was founded by Cadmus, a Phoenician prince. Cadmus came with an ox cart and hence the name of Budva – a variation of the Greek name for an ox (βους, βόδι). Here you can explore the narrow streets, small squares, plazas, cafes and galleries. During the summer months, concerts, performances and exhibitions are also held here. 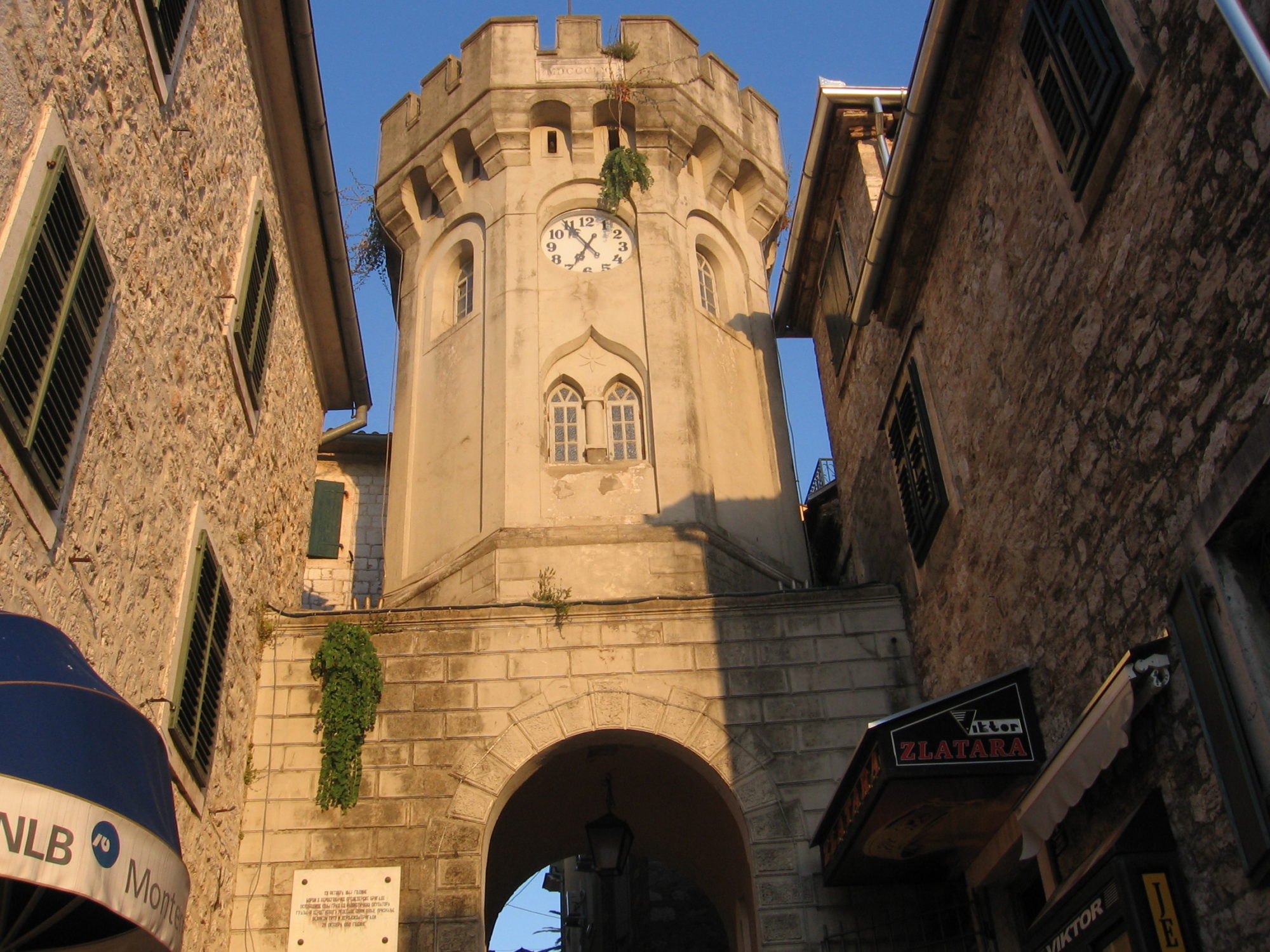 Herceg Novi has many attractions. One of them is Sat Kula (Sahat Kula – Toria i.e. the Clock Tower). The Sultan Mahmud had it built in 1667. During Turkish rule, this structure served as the main city gates.  In the arcade of this structure there is a sculpture of the Madonna which is often referred to as the Black Madonna because it was made from burnt wood in remembrance of the founder of the city, Tvrtko I Kotromanić. This sculpture is in the form of a bas-relief made by Afran Hozić from Sarajevo. In 1995 the city of Zemun gifted an electric clock to the tower to replace the old clock.

The town of Perast (Italian: Perasto) is one of the earliest inhabited areas in the Bay of Kotor in Montenegro.  It is an ancient coastal town that has developed modern urban infrastructure. Close to Perast are the islets of St. George and Our Lady of the Rocks. In Perast you can view churches, palaces, museums and galleries and even the Fortress of St Cross. Many traditional activities are also held here of which the most famous is the ‘Fasinada’ on the 22nd of July. 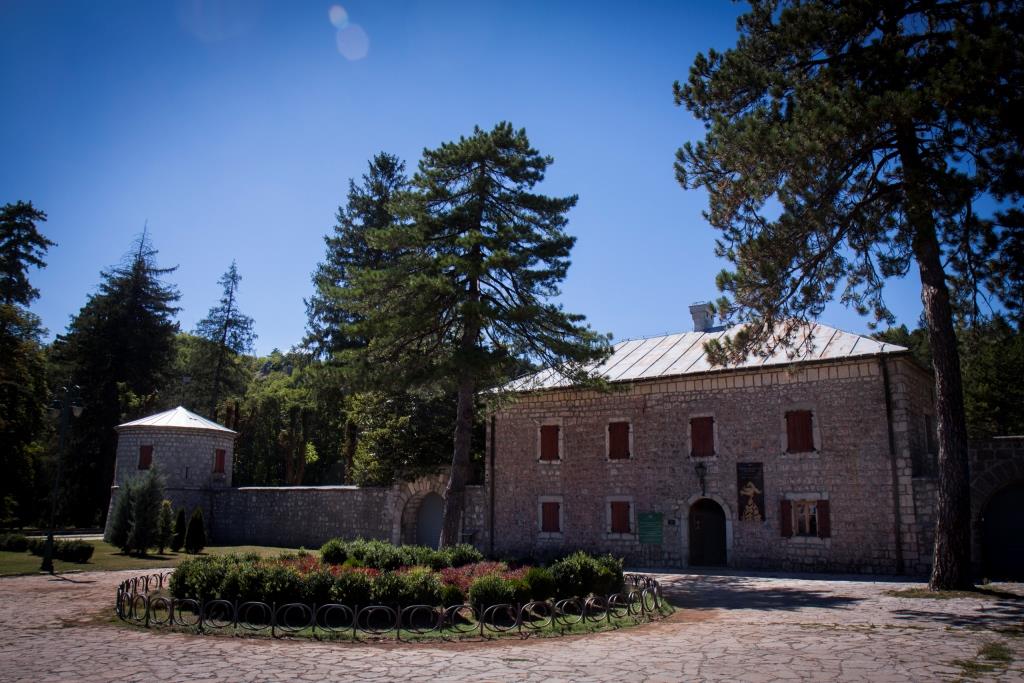 The Billiards house was where the poet and philosopher Petar II Petrovic Njegos was staying when he wrote his most important spiritual and secular works.  It was built in 1838 and was partially financed by Russia. It was first called The New House but its name was later changed to the Billiards House after the first introduction of the game of Billiards by Njegoš; this was his favorite game. It is located in the historic town of Cetinje close to the Cetinje monastery. This building resembles a medieval castle and has had a variety of uses throughout its history. Today it serves as a museum.

#8.The Palace of King Nikola 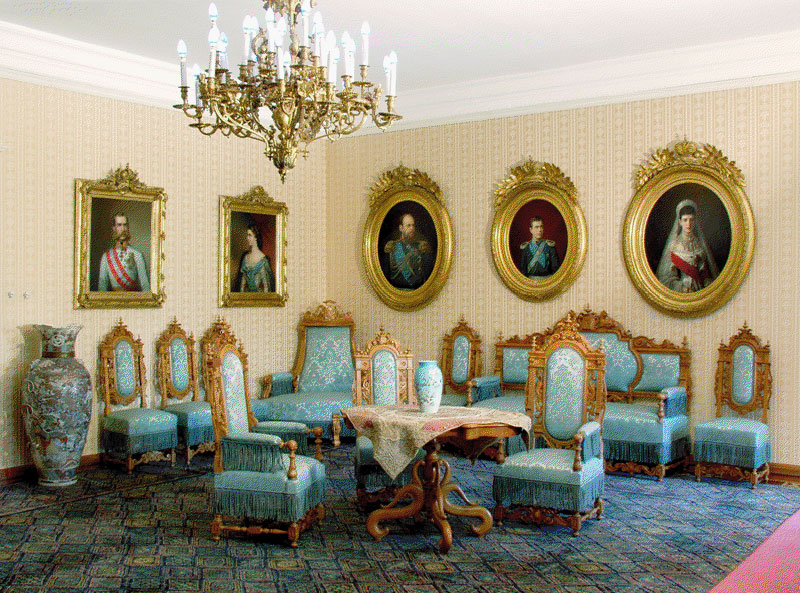 This historical museum has been developed to retain the look and feel of being in a palace. It was originally the National Museum in 1926, and later became the State Museum of Montenegro. This museum contains thousands of objects in each of the categories, archaeological, ethnographic and art. There is also a court library with 10 000 rare books in it including two Oktoih books. Here you can view medals, weapons, seals, emblems, coats of arms, photos and other decorations. 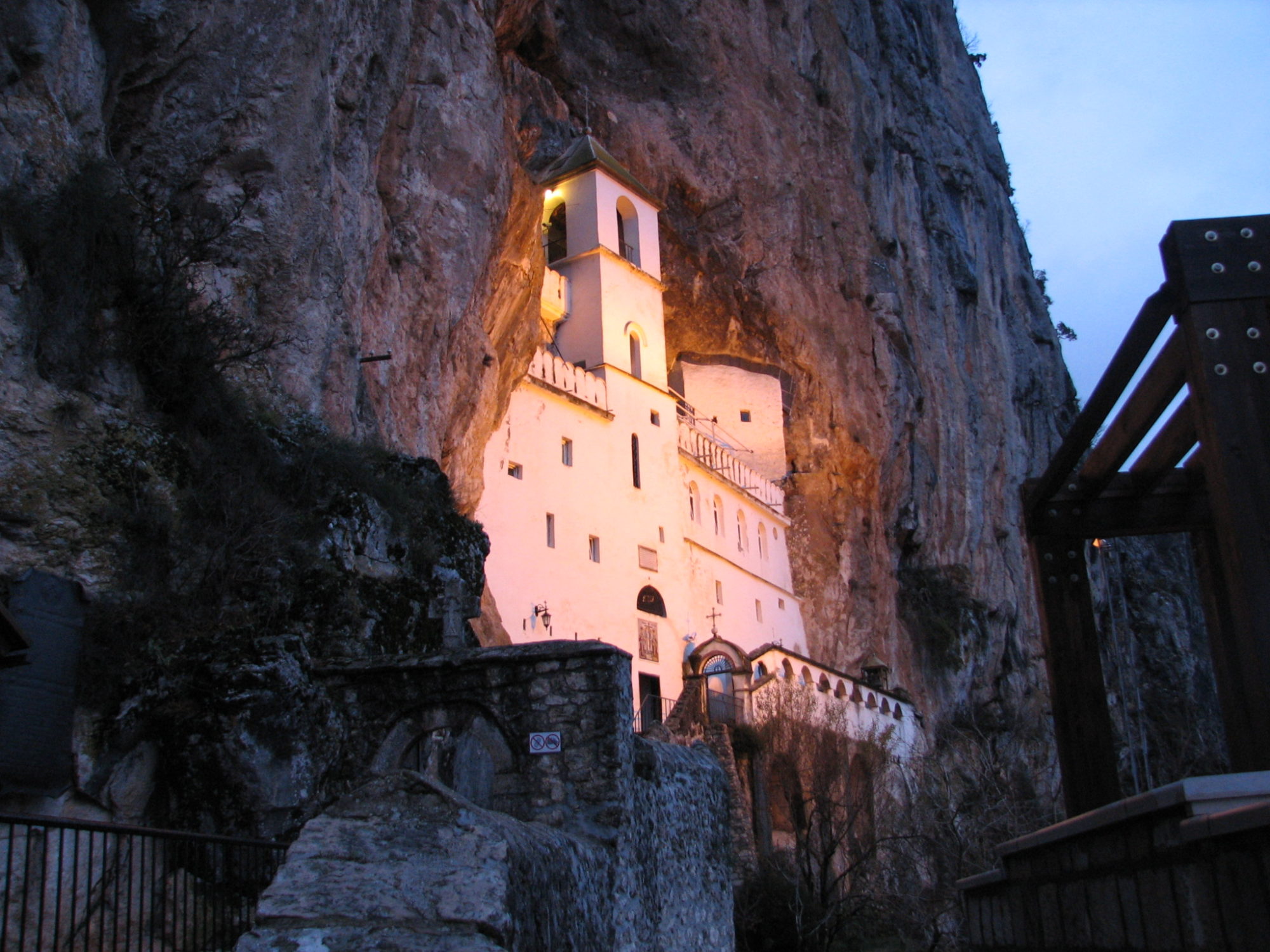 The Ostrog Monastery was built into the rock face of Ostroška Greda, in Montenegro. It belongs to the Serbian Orthodox Church.  This monastery is dedicated to Saint Basil of Ostrog (Sveti Vasilije Ostroški), who is also buried here. Special events and worship services are held here all the time. It is a very popular pilgrimage place that is located 50km from Podgorica and 15km from Nikšić. It’s not only this monastery that is worth looking at, the view from the monastery across the Bjelopavlići plain is in itself breathtaking.

In the Southwestern area of Montenegro, you’ll find the Lovćen National Park.  In this park is the Petar Petrović Njegoš Mausoleum.  This large and imposing mausoleum was built by the famous Croatian sculpture, Ivan Mestrovic from 1970 to 1974. Inside is a tunnel with 461 steps. The chapel is built from dark-green marble with a mosaic of 200 000 gold-plated tiles. Guarded by two large sculptures is the remains of Njegoš.  Initially Njegoš was laid to rest in a small chapel, however, that was destroyed in the First World War and this mausoleum was built in his honor many years later.

One also has a stunning view of Montenegro from this mausoleum. 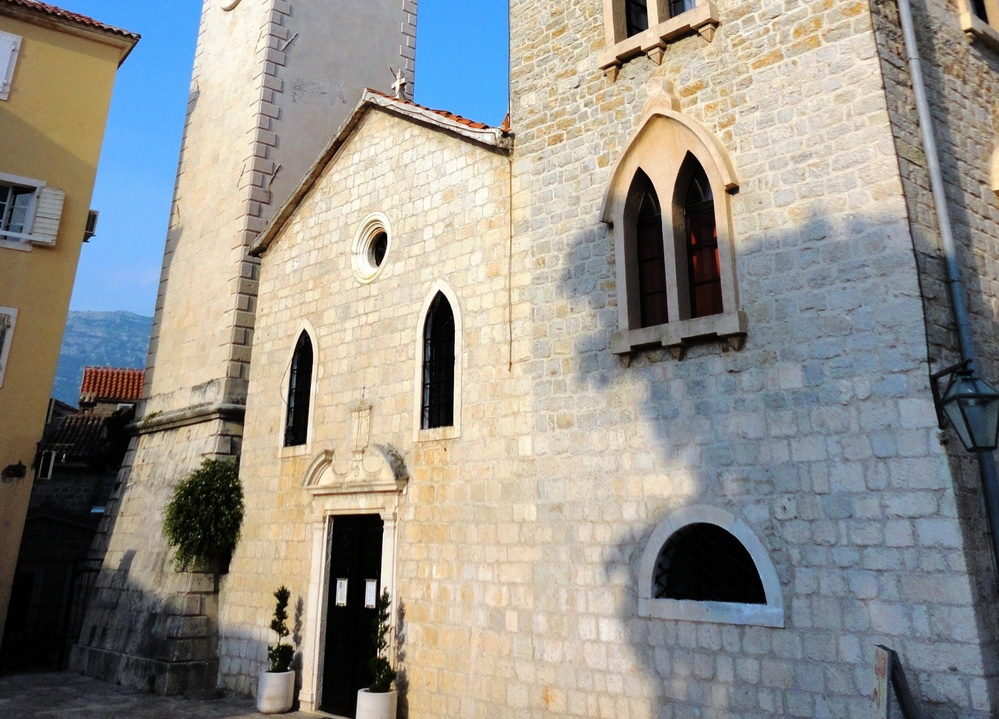 The Church of St Ivan is one of the oldest churches on the coast and is believed to have been built in the 7th century.  The cathedral was destroyed by an earthquake in 1667, and was reconstructed several times, a high tower that dominates the town was built in 1867.

In this church you can see an icon of Madonna and a mosaic of Murano glass created by the famous Croatian painter Ivo Dulčić and more items of artistic, cultural and historical value.