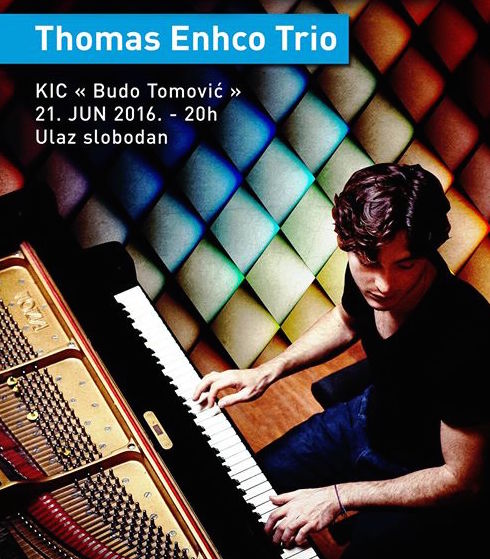 Laureate of prestigious national and internacional awards for jazz: the nominations for the prestigious French award “winners of Jazz” (Victoires du Jazz), in the category “Album of the Year” for the album “Feathers” (2015); Third prize at the International Piano Competition “Piano Jazz Martial Solal” (2010); Prize “Golden Django” (Django d`Or), in the category of “new talent” for the author album “Someday My Prince Will Come” (2010); First prize at the first international competition of jazz bands in the festival “Jazz à Montauban” with his group “Enhco Thomas & Co.” (2011); FIPA d’Or, the award for best original score for the film “Five of the world” (the original title of the film: Les Cinq Parties du Monde); 2013 won the prestigious “Pobjedinici jazz” (Victoire du Jazz) in the category “Discovery of the Year”.

The most important albums: Esquisse, published by the “Ames”, 2006; Someday My Prince Will Come, publisher of “Blue in Green” (Japan), and “Ames” (France), 2009; Fireflies, published by the “Label Bleu”, 2012; Feathers, published by Verve Records, 2015; album “Funambules” in a duet with Vasilen Serafimovo marimba, Deutsche Grammophon, 2016.

Toma Enko his abundant talent discovered in the family of artists. He started learning the violin at two years, a few years later the piano. His father Jean Etienne Koen Set, former director of the publishing house “Calmann Levy” skilled pianist, had a huge impact on the small Tomasa, playing compositions by Beethoven and Bach. His mother is a prominent opera diva Kasadesi Carolyn (Caroline Casadesus), daughter of the famous French conductor Claude Kasadesija. Tomas and his brother David, who plays the trumpet, began to deal with jazz when their parents divorced. Their mother remarried to a famous French jazz violinist Didijer Lockwood (Didier Lockwood), who runs the school of jazz “Centre des Musiques Didier Lockwood,” where Tom and David were among the first students. There he was taught by the best French and international artists (Mike Stern, Bireli Lagrene, André Ceccarelli, etc.).
At fourteen he formed his own group Enhco Thomas & Co. Young Enka noted American drummer Peter Erskine (Peter Erskine), who worked on his first album (album Esquisse issued 2006). With šestaest old was admitted to study at the National Conservatory of Music in Paris in the department of jazz and improvizaovanu music. From 2006 to 2009, used the scholarship Sacem Action Fund, to assist in career development.

Through Enkov performance and composing music is reflected in his personality: Romantic, intense emotions with a sense of beauty and harmony, originality, uniqueness. He plays what he wants, and it can be classical music at one time, but in a jazz the next. Listening solo performances Tome Enka is a great experience. In the opinion of critics Elke Beckmann, it is a pianist of exceptional virtuosity and sensibility, “It’s nice to watch how skillfully uses the whole spectrum of piano playing with the left and right hand cross, in order to obtain” fullness “piano with a soft and intimate sound.”

He has performed all over France, as part of a three-day piano festival in Belgium, as well as the Jazz Festival, “North Sea” on the North Sea coast in the Netherlands, and the USA, Africa and Japan and China

He often performs with his trio, which, next to it, make a drummer Nikola Ferrand (Nicolas Charlier) and bassist Jeremy Brijer (Jeremy Bruyère), which they will perform at a concert in Podgorica. Within the trio he explores and mixes the elements that make up its culture (jazz, classical music and prop-term) with fantastic energy and intelligence.