Top 10 international music events in Montenegro for the summer 2019 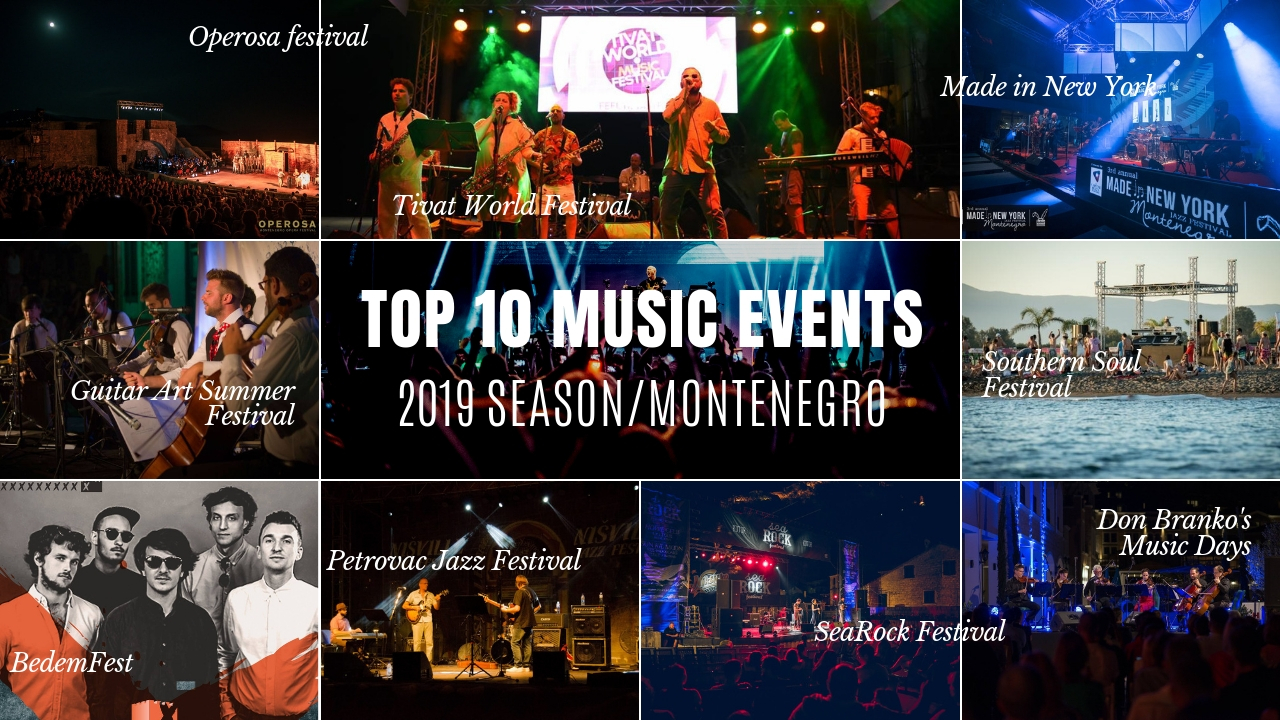 We have collected the biggest events in Montenegro that are already scheduled to happen in the season 2019. Choose yours and don’t miss your Montenegro 2019 experience!

Made in New York Jazz Festival, Montenegro is one of the most influential jazz festivals in the region. Every year, this festival hosts jazz celebrities, also some regional and local jazz performers, all of them on one stage.

KotorArt Don Branko’s music days, a festival which has an extraordinary significance for the town of Kotor, for Montenegro and even the entire region. With its special, different, but the original impact, this festival changes and contributes to a different way of thinking of its diverse audience; in many aspects, from cultural, artistic, even to ecological. It points out and discovers the importance of such festival and strives for artistic excellence.

The Adriatic coast of the southern Balkan country of Montenegro will be the setting for a musical eco-holiday this summer from 26 June to 1 July during the Southern Soul Festival Montenegro.

Over 40 musical acts on three stages will be presenting a mix of different musical genres from funk and jazz to house, soul, and disco. The festival’s green focus means the aim is to keep carbon emissions to a minimum. Visitors are asked to use public transport to minimise their carbon footprint and plastic bags are banned.

For the 6th year in a row, this festival will be handing in Montenegro. This time on the Buljarica Beach, near the city of Budva, a 2-mile long sandy cove with spectacular views to the surrounding mountains facing some of the best sunsets in the Adriatic coast.

This summer, the festival-goers from all over the world will get to party in the Adriatic with David Guetta, the French superstar who spearheaded the music industry’s revolution making electronic music its leading genre and DJs its next superstars.

Another star and the best atmosphere creator Robin Schulz brings his party anthem and a handful of other hits to the event of 2019.

This year the festival will be held in more locations, 3-4 stages. Program of Tivat World from 2018 was music, street art, intangible cultural heritage. In 2019 a new segment is added – ecology. Tivat World 2019 will contain ecological workshops, public debates, artworks and more on ecotopic. That will be three bands from Montenegro, three from the region and, at least, four from the world. For the first time, we will host one of the world most famous band.

SeaRock Festival will be held on July 20, on the summer stage in Kotor. Kantautor and Portland producer M.Ward will hold a concert with Howe Gelb! Other names and festival headlines will be released shortly!

M.Ward (Matt Ward) is an American producer and producer from Portland, Oregon, famous for his musical style between folk, blues and American. He has been active for 20 years and has released 10 solo albums (of which “Transistor Radio” from 2005), as well as several in the She & Him project. He collaborated with Cat Power, Neko Case, My Morning Jacket, and of course Howe Gelbo (very commonly). M.Ward & Howe Gelb will make a joint appearance at SeaRock 2019!

Petrovac Jazz Festival – Montenegro is an annual multi-day music festival held in Petrovac /Montenegro. It was founded in 2007 as a need for the cultural change in society and the transformation process of cultural policy of Montenegro. So far the number of musicians participated in the Festival is about 800 (90 bands) from more than 22 countries such as USA Italy, Germany, Austria, France, Denmark, Holland, Israel, Great Britain, Island, Norway, Ukraine, Macedonia, Bulgaria, Macedonia, Serbia, Japan, Poland, and others.

Guitar Art Summer Fest is an international classical guitar festival. Concerts are held every night at the heart of the Old Town between the two churches, the Music School, between the stone houses and the summer sky. Certain concerts are held every year on the ancient Kanli Kula Tower. Within the framework of the Festival, a summer school of the guitar takes place over the day, with GASF supporting and promoting young talents who have the opportunity to work and perform with the biggest guitar artists.

This year Operosa festival is excited to announce a unique program that showcases young and talented artists trough modern production and in collaboration with some of the most renowned opera festivals in the world, such as Festival d’Aix-en-Provence, Calouste Gulbenkian Foundation, Helsinki Festival and more.

Operosa Montenegro Opera Festival takes place every year in August in the stunning open-air fortresses Kanli Kula and Forte Mare Amphitheater overlooking the Adriatic Sea in Herceg Novi in Montenegro. The Festival combines unique performances of international opera talent with the rich local cultural heritage attracting an ever-growing audience and media from across the world.

BedemFest2019 is a summer music festival on Niksic fortress followed by other artistic contents. At the ancient walls of the city fortress musicians and visitors from the region and Europe are gathered to promote peace and interculturality. The festival presents tourist offer for the municipality of Niksic and promotes cultural heritage, and one of the ways for its valorisation. The anniversary of 10 years of love, art and unique feelings Bedem fest will celebrate from 2 to 4 August 2019. Book the date for the best story written on the walls of the old town of Bedem in Niksic – Tenth BedemFest.

Obviously, this is not the full list of the events that are going to happen this season. Follow our events’ calendar to schedule the one in your calendar and not miss it on the day of the event.