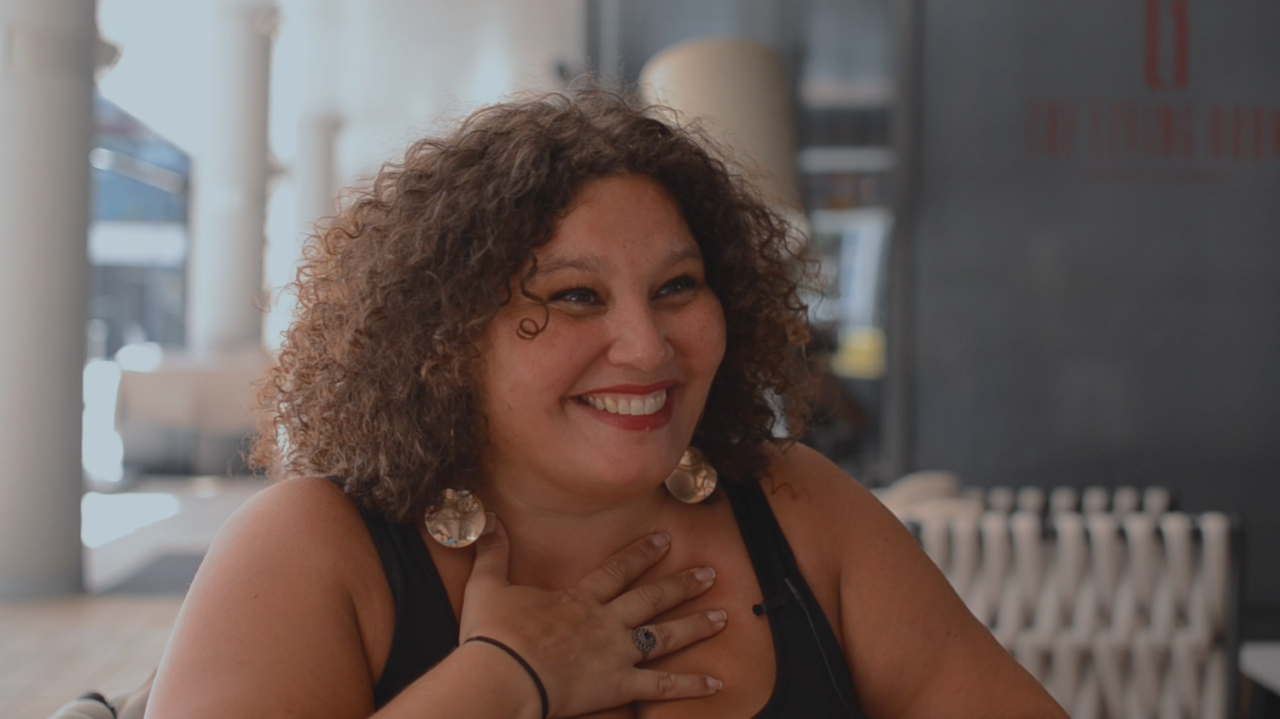 The voice and the energy from this woman create shivers…We talked to Marianne Solivan about women in jazz, who musician are nowadays apart from being a musician, how digital technology changed the industry and what’s the secret of success for young musicians these days.

I wouldn’t say that everyone’s talented equally, but there’s definitely no sex that is more talented than the other. Right? Sometimes that’s hard to think about or discuss because we’ve had so many. The music industry’s been dominated by men, so we sort of think, well, they must have been the most talented. But there are so many things in our society that slowly push women out of this industry that we hadn’t seen a time when women were given the same amount of opportunity to see what talent they would bring. So, I hope I live long enough to see a day, where we have way more women and see how they express themselves.

It’s interesting because sometimes people think of musicians like they’re only one thing and most musicians now have to do all of these themselves. So they’re doing PR and contracts and producing, and writing, all of these themselves. And it’s quite a huge skillset; it takes so many different types of talent to do that. I’m really lucky because I don’t feel when I have to do the business side. I don’t dislike it. I feel like “Okay, I can manage that”. Where sometimes for artists it could be really difficult to do that side of the job. But so far, it’s been okay.

I think everybody finds the measure of their success very differently. I want to play music that I love. I want to try and find places that will allow me to perform like me and not have to perform some other [person]. I don’t want to have to go and pretend I’m Ella Fitzgerald, you know, I love Ella, I never going to be Ella. So, being able to have the opportunity to play like myself and be allowed, that is really important to me. So, in that way, the more that I’m able to find performances that allow me that and venues or festivals that allow me that, that’s where I feel that I’m successful.

I’m a very energetic person. I wake up exactly like this, and I go to sleep exactly like this. I don’t know… I’m not sure how it all came out this way for me, but it’s very important for me to have a lot of physical energy when I sing. I’ve never seen a singer who was really low energy who I loved the voice as my personal preference. So, I need that to be able to sing the way I want to sing and have the body do all of the things, all the ideas that I come up with. I need my body to be ready for that. So, yeah, energy to me is really, really important and I feed off all the energy of everyone else on stage, which is like it’s like an electric shock for me of like “Oh! here’s more!”

I’m generally on the side of like I don’t really approve, but it’s something that’s just part of our existence now, almost like a tidal wave that you can’t stop by just standing up and putting your hands out. It’s just so big. Generally, I have not seen any artists that I know who are on the streaming service that I’m on (both my records are on streaming services), I haven’t seen it make that much of a difference, and it definitely doesn’t make a monetary difference, I should say. So, I don’t know. It’s very hard to know plus you’re not in charge of any of the numbers. So, you’re putting your faith in a company, and in companies that I’m not sure they’re actually looking out for you. They say they are, but I don’t know. So, it’s sort of like the evil that you have to live with, really. I just became, I guess, a customer of a streaming service because of my teaching, and it makes it easier to share music with my students. But it also makes me very sad that you can listen to all the great music of the history of the world for seven or eight dollars a month.

Digitalization & future of the Jazz music

One thing that I’m still trying to figure out for myself is the idea of the record not being a thing anymore. We spent so much time um in school and in our professional lives as jazz musicians creating a record or a CD where there was sometimes a theme throughout that connected, there were some ways that we felt connected from one song to the other and a rationale for putting all of these things together, right? And it felt like this big project that she would do to create a record and bring this talent together. That’s pretty much gone now. So, I think reshaping and figuring out how to put music out, and little bites that still can somehow allow people to get to know who you are as an artist because that’s what a record did by you listened to 11 songs and you kind of understood who these artists were, right? But when you don’t have that, how do you really get to know, who this artist is enough to want to listen to them more and more, right? I’ve done two live stream concerts in this pandemic, which were amazing artistically to be again with musicians, but it’s very weird to be staring at a camera when you’re singing a song that’s filled with emotion and feeling. And I’m not like staring at somebody’s eyes. And feeling the energy and understanding that they’re accepting the energy I’m giving them that’s sometimes it’s it feels very cold. So, we have to find ways to manage that. What is the way that we’re gonna evolve into still being able to give all that feeling and emotion even though it’s not really coming back? So, it’s really interesting, and it’s going to be really important for jazz musicians I think in particular to really want to evolve. We have to evolve! That doesn’t mean the music dies, right? It means that music is delivered in a new way.

Want to be remebered for…

I just want people to have thought that I was joyful. That’s it.