It never gets boring 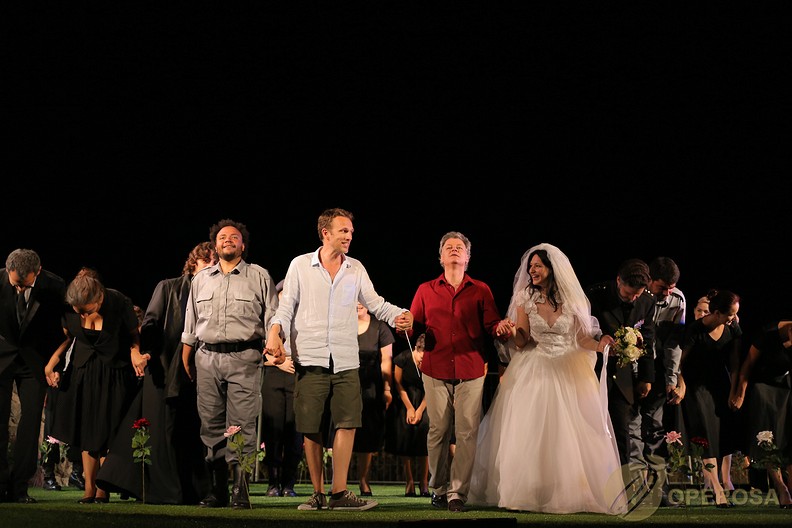 Ashley Dean has come to Montenegro for the first time. He has the amazing task of putting talented people together in order to create something unique and impressive on the stage. Read the full interview to get a glimpse into his life and how he’s fulfilling this task.

#mnetoday: Ashley, you graduated from the Central School of Speech and Drama at the University of London. Can you please explain to us and our audience what a stage director is?

AD: I would say that there’s two roles, especially when working in Opera – firstly interpretation and secondly coordination.  Regarding interpretation, we have a great number of works of arts, masterpieces from composers from the last 350 years, some of which were composers who were famous in their own lifetimes and some whose work only became relevant to us after their death; now these works of art, if they are not performed, if they are not seen in the way that their composers intended, then they will be lost to us or they will lie forgotten until later generations. So the first job of a stage director is to firstly approach it from the point of view of the audience to create something exciting, something interesting and invigorating for them that is attractive, but also to look at it from the point of view of the composer and, even 300 years after a piece was composed, to pinpoint exactly what the composer wanted to convey to an audience. The world is very different now than it was 300 years ago and we have very different ways of telling stories. So if you approach it from the audience and from the composer’s point of view then as that meets that’s what makes a production. The second thing is coordination. You mentioned my training at the Central School of Speech and Drama. I was an actor before; I moved from acting to directing plays and ensembles through to directing opera. Now opera is a very exciting thing to work in as a director because it is the combination of many art forms. It’s the culmination of acting, singing, performing, music, dance, choreography, design, costumes, and architecture. The coordination of those things to make a production is the technical part of it.

AD: I would say that the main challenge is the venue. It’s a very exciting challenge because on one hand this opera is perfect to do in this venue, in Kanli Kula because it’s a little bit like a fairytale – it’s about a blind princess who is kept secret and hidden by her father in a protected, fortified place in the mountains and forests. So it is a perfect venue for the opera itself. However, this is not a theatre, this is not a traditional opera house. There is no orchestra pit or lights and sometimes is quite difficult to make something site-specific in this way. But those are our challenges and we’re getting there and I think by the time we finish we’ll have created something unique. And that’s the exciting thing about doing this specific opera in this specific venue. It will never happen again – it’s unique.

#mnetoday: What does a typical day of a stage director look like?

AD: Well the great thing about that is that there is no typical day for a stage director. The process can be very long; it can be up to a year that you’re working on a production. The first section is working out the best way to present it, then working out what your resources are and then how you’re going to present it and then you move into rehearsals and then at the sharp end, the technical rehearsals. It’s dealing with a lot of different groups of people. It never gets boring.

#mnetoday:  Can you remember the craziest, most unexpected thing that’s ever happened to you while working on any production?

AD: Crazy and unexpected is not great when we’re working in opera because what we want to do is to create things that are expected. Because of the amount of planning that’s involved, unexpected things are not always welcome. But actually there was one production that we did a long time ago and when the cast arrived none of them knew each other and when we finished the production two of them got married, a month later. So we must’ve gotten the chemistry right at that production.

#mnetoday: What are you the most curious about today?

AD: At the moment I would say it’s this production, this opera. In Western Europe Tchaikovsky’s Iolanta is not performed as much as his other masterpieces like Eugene Onegin and Pikovaya dama, Queen of Spades. It is a great opportunity for me to really delve in, to find out what is so special about this piece and there is plenty that is special about it. This was Tchaikovsky’s last opera. It was a time when he was a master of drama and music and the more that this piece is performed, I think people will realize that it has some extraordinary drama and music in it. That’s what I’m obsessed with at the moment. stage director

#mnetoday:  What makes a working day a good day for you?

AD: It depends on what we’re doing. At the moment we’re in the middle of staging the orchestra so we’ve got lights, the orchestra performing, design – everybody is trying to do everything at the same time. At the moment it’s difficult to see the final result even though it may not look like it’s all coming together; it takes a keen eye to see that things are actually progressing. Sometimes it may not look like that but we have to think carefully about the progress that we’re making and I think we’re making good progress.

#mnetoday: Thank you very much for the conversation.